If you have been around VMWare long, then you have cloned, restored or otherwise copied a virtual machine.  When the copied virtual machine is created, it is given a different MAC address, which causes VMWare to see its network adapter as eth1.  This will result in eth1 being assigned either a DHCP address at boot if available or to use a self-assigned address if not.  This article shows how to fix this problem using Linux, but whatever operating system you are using, the steps are similar.

The problem begins when, after cloning a virtual machine, the eth0 device cannot be found by the kernel.  You will normally notice an error during boot similar to:  “Bringing up Interface eth0:  Error:  No suitable device found:  no device found for connection ‘System eth0’.

As I mentioned above, this is caused when the new virtual machine is created.  VMware has assigned an ethernet adapter to the virtual machine with a different MAC address than what the source VM was using.


This issue is fairly simple to resolve.

Find the New MAC Address for Your Network Adapter

There are many ways to find the new MAC address assigned to your network adapter.  Since this is VMWare, you can simply edit your virtual machine in VMWare and look at the MAC Address assigned to “Network adapter 1”.  Or even simpler is to use ifcfg to list the adapters on the machine.  In the example below, you can see that this example machine, (a clone of my quickbook server) couldn’t find eth0 by MAC address and assumed it was eth1 and then picked up a DHCP address instead of using the configured address for eth0:

ifconfig shows eth1 instead of eth0 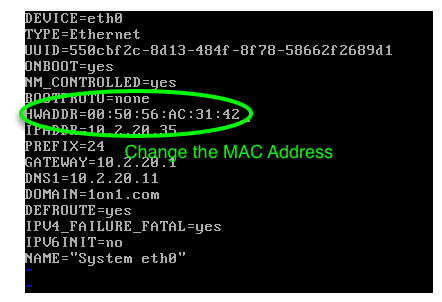 Edit the MAC address in /etc/sysconfig/network-scripts/ifcfg-eth0

With this information, grab the HWaddr, we will then edit the /etc/sysconfig/network-scripts/ifcfg-eth0 file and change the HWADDR parameter to the MAC address that you found in one of the 2 steps above.

Use a Unique IP Address

Since this is a clone of a current server, you will want to be sure, since you are already in this file that the IP Address assigned to this adapter is unique on your network.  If the source virtual machine that you cloned this machine from, you will want to resolve the conflict before continuing.

After changing the MAC address, you will need to either reboot the operating system or restart the network adapter service.  In my case, as I was on the console of this CentOS 6 machine, I simply restarted the network service:

← Speed up Your WebPage with Varnish
Monitor VMWare Datastores with Esxtop →