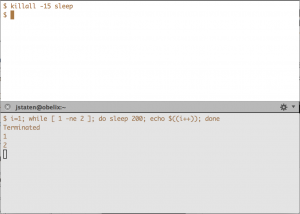 From time to time, if you are a Linux Administrator, you will have to kill a linux process.  The linux kernel has at least 32 signals.  Amongst those 32, you may recognize some of the more common ones:  SIGTERM, SIGHUP, and SIGKILL.  But what you may not know is that killing a process isn’t always a matter of killing a process, but signaling to the process to shut itself down or self-terminate.

Commands such as kill and killall send signals to running processes.  Signals can be specified using a the Signal Number or Signal Character Name.

Below are some examples of using kill commands with different signals:

When you want to kill a process, it can be tempting to go all out with the “kill -9” command.  Kill -9, however, does not close files properly.  This creates some risk of damaging files, so it should be used as a last resort, using kinder methods first.

There are really two ways to shutdown a linux process –from inside the program or application itself or by telling it to terminate from the kernel.  Every application has a method designed for shutting it down.  You should try this method first.  If it is a GUI app, there may be a menu with a quit option.  If it is a service or daemon, you can try to shut it down with the service control manager.  You can read more about this in one of my past articles:  Booting, Changing Runlevels and Configuring Linux System Services.  The general idea is to using the “service <daemon name> stop” command to shutdown your process using the normal method.

After trying the nice ways to kill a command then you can start using signals starting with the nicer ones like SIGTERM or SIGINT and moving up to SIGKILL.  Be certain when using a nicer signal to give the process time to release resources and shutdown properly.  It may require a bit of patience.